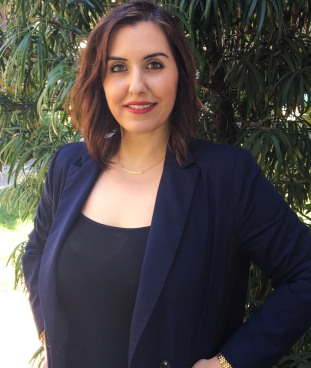 Samira Saffarzadeh’s life story is one of relevance in times like this. She has successfully pulled through challenging circumstances after being hit with different societal and cultural issues of concern.

When Persis M. Karim, Ph.D.; the Neda Nobari Distinguished Chair, and Director of the Center for Iranian Diaspora Studies at San Francisco State University interacted with Samira, she provided insights on her life and family story.

Samira is a Senior Project Manager (PMP, SCPM) and host of “We’re Not So Different” podcasts. As an American born and raised in Fresno, California to Iranian immigrant parents, she is no stranger to boundary crossing. Whilst taking Chemistry as a major in Fresno State University, she met and bonded with her about-to-be husband. He was African-American and also a Muslim, and she was curious learning about Islam.

According to her “I was very young, a senior in high school, and my family was in the midst of big changes. My parents were dealing with their divorce, and my mother had embraced Christianity. I was embracing Islam after leaving the church to look for something more structured. My family struggled with me about my relationship with an African-American man. They were worried about us getting married so young, about my embrace of Islam and wearing the hijab. They were also concerned about my then-husband’s conservative family, and the challenges we would face as a mixed couple such as raising biracial children. They definitely had some biases because of his race and were uncomfortable with their daughter turning toward a religion that they felt was being used to oppress those in their homeland, Iran.”

Samira was optimistic and went ahead with the marriage. Despite her determination, the young couple faced various challenges. She was a student when her husband was laid off after the 9/11 disaster, and so she started taking vocational classes to become a licensed pharmacy technician. The couple decided to move to Texas with their older son, Nuri where she worked as a Pharmacy Technician and later as an Administrative Assistant to the CEO/ Founder of a startup. In 2005, they welcomed Mansoor, their second son.

It was whilst working at the startup where she coordinated and supported all departments that gave her an entry into Project Management. According to her “I approached the Director who at the time had a hard time finding a replacement for a Project Manager who had walked out. I said to the Director: if you’re willing to mentor me, I can be the Project Manager. I met with the officers and they agreed to give me the opportunity. Within a year, I was able to obtain my PMP (Project Management Professional) certification and then within 18 months graduated summa cum laude with a BS in Technical Management and a concentration in Operations Management.”

With Samira’s strides in advancing professionally, the same could not be said for her family life at the time. After she and her husband separated, she moved back to San Jose with her sons to live with her family.

As Persis M. Karim, Ph.D. puts it, “Samira’s life and that of her children are infused with the story of her moving between, across, and inside the concentric circles of belonging she’s made.”

Samira started teaching her sons Persian at an early age. “I have done my best to raise my two sons to be open-minded and to love all their identities–Iranian, American, African American, and Muslim,” she says. “Norooz is their favorite holiday and they love Iranian food!”

After moving back to California, she enrolled her sons into Persian classes, dancing with different troupes and volunteering with the Persian Center in Berkeley. “I met a lot of wonderful people there that embraced my sons and me. I think that this has helped my kids to be more confident in themselves and feel comfortable in their skin” she says.

Hosting a Podcast: “We’re Not So Different.”

Samira has been working at Pacific, Gas & Electric (PG & E) as a Project Manager and now is a supervisor of a Business Systems Team. Persis M. Karim, Ph.D., in her interaction with Samira writes that “while she’s been actively engaged in her professional life, she’s found other ways to raise issues about cultural, religious, and racial differences, as well as to promote cross-cultural understanding. Along with her PG&E colleague, she hosts the podcast, “We’re Not So Different.” Saffarzadeh says the podcast grew out of her own work as the founder of the Middle East, Europe, and North Africa (MEENA) Employee Resource Group (ERG) at PG &E. She and her colleague, who serves on the board on the Black ERG, used to “hang out after meetings and talk about all the issues we couldn’t talk about in the office, and we did it with laughs and we kept saying, ‘this is what we really need to be talking about!’”  Eventually, they decided to start a podcast so they could share their experiences as professionals, parents, and as an Iranian-American woman, and an African-American man.  The more they talked, the more they saw how much they had in common.”

During the 100 days of the San Francisco Bay Area’s shelter-in-place order, they have been hosting an Instagram live session each Thursday from 5-6pm. According to Samira, “we started this podcast—so people can listen and learn more about our cultures and how to engage better with each other.  We talk about family, health, politics, entertainment, and how to be allies and make a difference in the world.”

Dealing with issues of discrimination and its perceptions

Having biracial children, Samira is deliberate and thoughtful with her parenting approach being very conscious about race and the ways it impacts her sons’ lives as well as her own.  “I am also watching how the events of George Floyd’s murder and the Black Lives protests are affecting my sons as young men. I’ve encouraged them to see their complex heritage and to decide for themselves how much they want to be involved in these protests. They’ve had to deal with challenges from the Iranian-American community, from white society, and they’re keenly aware of the perceptions others have of them,” she says.

It has been painful for Samira dealing with racism for herself and her children. “Sometimes people don’t believe they’re my kids. I’ll never forget the first time someone called my son the N-word at school and when I showed up, you should have seen the look on people’s faces.  They didn’t know what to say.  It’s difficult to know that people won’t give them a chance or may target them in a violent way because they’re biracial, and have dark skin. They’re amazing boys and they deserve better than that.”

More than once, she’s experienced encounters where fellow Iranian Americans look at her with a quizzical look or has had to be confronted with a statement like “Dokhtar beh een khoshgeli chera ba yek sia poost rafti?” (translated as: with your beauty, why did you have to get involved with a black man?).  She describes that all four of her family members frequently felt like “outcasts.” Also, despite being Iranian, her ex-husband’s family still viewed her as “the white girl,” and had to break through to develop a deeper connection with them. Eventually, the differences between their families and their expectations contributed to the dissolution of her marriage. She says that her resilience and that of her heritage has helped her. “It gave me something to go to when things started to fall apart.”

In conclusion, Persis M. Karim, Ph.D. writes; “despite these challenges, and the ways she tries to support her sons—particularly at a time like this—Saffarzadeh says she draws strength from the resilience of Iranians and the community they’ve built. She says she talks openly with her sons about issues of race and identity, and is invested in letting them decide for themselves whether or not to participate in the protests. “But they also know how to enjoy themselves, and for that, I am grateful” says Saffarzadeh. She credits some of that to her Iranian heritage. “I appreciate how we can manage to find joy and humor and beauty in the face of darkness and hardship. Our music, art, comedians, and activists have really inspired me.  Iranian women are warriors! We continue to overcome so much and still we rise and we do so with grace.”

We so appreciate Samira Saffarzadeh sharing her story and insights with us. If you want to follow her podcast, go to:  http://www.wnsdifferent.com. Samira has made peace with all the ways her youthful search for belonging gave her tenacity, and a way to straddle all the worlds she inhabits.

The Center for Iranian Diaspora Studies is an established center for research, scholarship and creative activity that focuses on the global Iranian diaspora. The Center, established with a gift from Neda Nobari, is directed by Dr. Persis Karim. Drawing upon San Francisco State University’s robust academic foundation of ethnic, racial and social justice, the Center for Iranian Diaspora Studies inspires interdisciplinary inquiry and exploration of Iranian diaspora experience and its impact on transnational identity.